Anyone who has travelled to the Great War battlefields will be used to the sight of immaculate CWGC graveyards with their rows of uniform headstones, everyone accorded the same level on dignity in death, regardless of military rank of social status before or during the war. The story behind the CWGC is well told in this article

During the conflict battlefield crosses had to suffice - made of whatever materials were to hand and often by the men who had lived and fought with the man to be buried. They can be seen in illustrations from the war and postcards created in the years immediately after the end of the conflict. As the CWGC began it's work they were gradually removed and many were obtained by the families of the deceased. I have recently visited three in Somerset, I find them fascinating, often showing marks of weathering, woodworm or battle damage, if you cannot visit the Western Front then they bring a little piece of it to you.

The first two are both housed in the small Somerset village of Mells, more on the village can be found in the post - Mells, Lutyens and Sassoon - it is placed in the back of the plinth of the Horner Memorial, created in memory of Edward Horner. Originally in the North Somerset Yeomanry, he was transferred to the 18th Hussars and was killed in 1917 aged 28. Son of Sir John Horner, his sister had married Raymond Asquith, son of the Prime Minister. H.H. Asquith.

In the same church, high on a wall in the Horner chapel is the battlefield cross for Raymond Asquith, son of the Liberal Prime Minister H.H. Asquith. It forms part of, but is separate from the other part of the memorial in the church. He was 37 and serving with the Grenadier Guards when he was killed in 1916
Shortly before Christmas I visited St Mary Magdalene Church, Taunton. Soldiers' Corner, dedicated to the Somerset Light Infantry is always worth a visit and I wanted to check up on something I had seen on the memorial to CB Prowse. It states that the battlefield cross was placed in the south porch of the church, but I had never seen a photo and was curious to see if it was still there 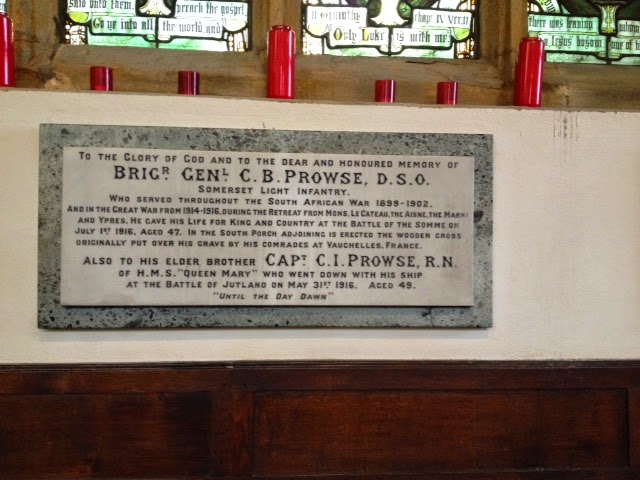 It was not, I assumed it had been moved for safe-keeping so contacted the church to see if they knew where it was - the reply was not what I expected, the cross was still in the church but not in it's original form: it has been integrated into a table dedicated to Brig Gen Prowse:

The Christmas Truce - Building a legacy

On the 11 January 1915 the war diary of the 1st Battalion, Somerset Light Infantry records that "The Truce came to an abrupt end today", concluding that the "friendly" enemy of the last two weeks have been relieved. Putting aside the thought that a Christmas Truce cannot really "abruptly" end on 11th Jan, it is clear that the Somersets were involved in one of the longer examples of the Truce. The war continued so was there any long-term legacy? I would argue that the length of the Truce meant that there was a significant change in the situation in the Ploegsteert sector as a result

The map below shows the sector in late 1914, it was produced in 1927 with the help of surviving members of the battalion. It shows (unusually) the position known as the Birdcage, attacked so disastrously on 19th December. I covered this in my previous post on the Christmas Truce. It also shows the main features of the sector such as Prowse Point and the unpleasant sounding Dead Horse Point. The photo below the map shows the Moated Farm


The Somersets had been in the area since October, in his diary (again, see a previous post) Private George Coward described the British trenches at that time as being a series of shallow, unconnected ditches, with little cover, the men in them suffered terribly and moving from one to another was hazardous. Instead of barbed wire defences there were empty tins hanging on wire to provide an early warning. Water was a constant problem, at one stage part of a front line trench was abandoned due to flooding

A series of pictures held by the IWM show the same area in May 1915, shortly after the Somersets left the area, they show a very different situation, the trenches look far more solid and there are series of huts and dugouts behind the lines, if not comfortable, then possibly bearable and the position as a whole seems more defendable.

This improvement seems to have been made possible, at least initially, by the Truce, which both encouraged and permitted a concerted push on construction. There were only a few incidents when shells land on or near the working parties in the early weeks of 1915 - one of these was on 3rd Jan, the soldier injured is not named in the diary but he left his autograph in a book owned by a Bristol nurse:


During the Truce the German positions were noted to be far more substantial than those held by the British and the lack of enemy action allowed men to work in safety. It,would, incidentally, be interesting to find out exactly what was going on in the German lines, the Dorsets, in the same sector, captured a German who wandered into their lines while intoxicated and there is an attempt to send a message across under the white flag shortly before the truce ends, my guess would be this was an attempt to warn their new "Camerades" as the Germans addressed the Somersets in the letter they succeded in sending over, that they are about to leave. They seem to have lost all interest in fighting.

The diary indeed features far more building than fighting during the first weeks of 1915. One entry in January reads "Quiet day, usual work". Screens to allow freer movement on the front line, (see The Tobacco Screen), breastworks, dugouts and huts all feature. As does the construction of a "Corduroy Path" a term which made little sense to me until I came across this photo in the IWM collection - when the name became a lot clearer


﻿This work seems to bring results almost immediately - the water in the front line trenches is "only" 18 inches deep and there are fewer reports of illness at this time.

The BEF seem to have strengthened their position in the sector, which had been precarious in October and November, the sector remained relatively quiet for much of the war. I will not claim that the time afforded by the truce allowed the BEF to dig in so well they could not be moved, but the legacy of the 1914 Truce may well have been a simple as a slightly improved quality of life for those who were based in the sector. Sadly for the Somersets, they were not in the sector for much longer to enjoy the benefits of their work﻿
Posted by The Somersets at 10:53 No comments: